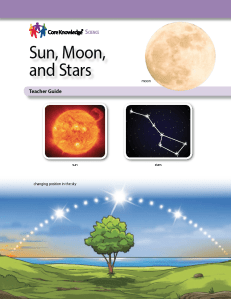 The unit builds on student understandings about sunlight from Kindergarten, such as K-ESS2-1: Use and share observations of local weather conditions to describe patterns over time. Lesson 1 also builds toward the Grade 1 target of 1-ESS1-2: Make observations at different times of the year to relate the amount of daylight to the time of year.

Students explore concepts that include the following:

Scientists, including astronomers, climatologists, and meteorologists, observe, analyze, and study patterns of the apparent movement of celestial objects to describe patterns in the natural world i to answer scientific questions. This series of lessons incorporates learning goals that support scientific principles and practices, such as analyzing and interpreting data, recognizing cause and effect, and planning and carrying out investigations.

Unit 1 Sun, Moon, and Stars includes two long-term investigations. To accommodate these, we suggest that you teach this unit in “blocks” throughout your school year, some spaced weeks or months apart.

Each lesson is divided into 4-6 lesson segments. During extended reporting periods, you will likely also turn your attention to teaching other science units.

Please note that a Pacing Guide and sample school year plan for this unit are provided in the Teacher Guide so teachers can map out customized instructional days for this unit. 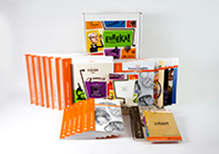 Purchase Additional Materials in Our Store