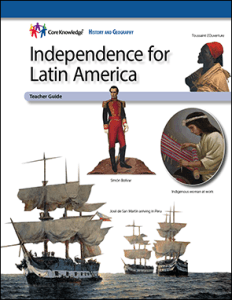 Focus: In this unit (Unit 6 for schools using the CKHG™ series in Sequence grade-level order), students explore the wave of independence movements that led to the liberation of French, Spanish, and Portuguese Latin American colonies, beginning in the late 1700s and lasting into the early 1900s. Generally, these colonies had rigid class systems, with wealthy landowners controlling large tracts of land and poor workers providing the labor. But by 1830, most Latin American nations had won their independence from European colonial governments, with the help of leaders like Toussaint L’Ouverture in Haiti, Miguel Hidalgo y Costilla in Mexico, Simón Bolívar in Venezuela, and José de San Martín in Argentina. Students also learn that while many of these revolutions brought about new political and personal freedoms, independence proved easier to achieve than political stability. Almost every Latin American country has experienced the same cycle of government control by caudillos (regional strongmen), revolution, civil war, and violence.