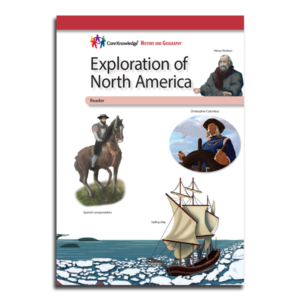 Focus: The resources for this unit (Canada) are part of the individual resources titled Exploration of North America. This unit (Unit 5 for schools using the CKHG series in Sequence grade-level order) introduces the geography and people of Canada. Students learn about Canada’s government, major population centers (including Montreal, Quebec City, and Toronto), and the country’s vast wilderness and natural resources. They are introduced to Canada’s indigenous peoples and to its French and British heritage, which lie behind the country’s two official languages. Students explore the strong influence of French culture in Quebec. They also consider similarities and differences between Canada and the United States, and learn how Canada’s history and relationship with Britain are different from those of the U.S.

Lesson Time: 30 minutes each daily. Lessons may be combined into longer sessions.