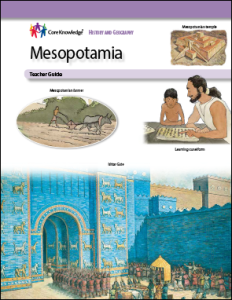 Focus: In this unit students will be introduced to Mesopotamia, an ancient civilization that developed in the land between the Tigris and Euphrates Rivers.

Students will learn that Mesopotamians began to rely less on hunting animals and gathering plants. Instead, they developed agricultural methods that enabled them to feed the population. Over time, some people were able to stop working on the land and instead were employed in other ways in the growing towns and cities.

Students will discover that building, governing, making and selling things, and writing all became alternative occupations in Mesopotamia, and that these jobs were often pursued by people living in the towns and cities. Such social centers were crucial to building what was one of the world’s oldest civilizations.

In the unit’s five chapters, students will study the development of writing in this “land between the rivers,” which allowed the Mesopotamians to pass on their laws and traditions. They will learn about King Hammurabi’s written laws, as well as about city life and the gods, goddesses, and temples of this ancient civilization.

CKHG Grade Levels: CKHG units are correlated to topics at the grade levels specified in the Core Knowledge Sequence, which allows students in schools following the Sequence to build knowledge grade by grade. In other settings, individual CKHG units may be used as supplemental resources. In general, the content and presentation in the CKHG units for Grades K-2 are appropriate for students in the lower elementary grades. The Mesopotamia  Student Book is intended to be read aloud by the teacher as the students look at images on each page.