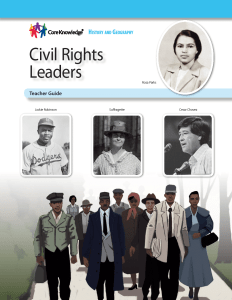 Focus: The Grade 2 Core Knowledge History and Geography unit Civil Rights Leaders celebrates the lives of people who faced injustice with bravery, and were able to make extraordinary changes for good.

The unit explores the growth of equality in the United States through iconic individuals. The unit begins with Susan B. Anthony. An abolitionist before the Civil War, she turned her focus to women’s suffrage and was instrumental in getting women the right to vote. Students then learn about Mary McLeod Bethune, an African American woman who devoted her life to the education of African Americans during the time of segregation. Next, the unit turns to Eleanor Roosevelt, who despite being born into privilege, was a champion for human rights, and our nation’s first representative to the United Nations.

Students discover Jackie Robinson, and his courageous work to break the color barrier in Major League Baseball. Then they meet Rosa Parks, and learn about the Montgomery, Alabama bus boycott that she inspired when she refused to give up her seat to a white man on the city bus. That boycott was led by Martin Luther King Jr., who is also profiled in the unit, as students learn about his life from his childhood in the segregated South, to his “I Have a Dream” speech in Washington, D.C. in 1963.

Cesar Chavez is honored for the work he did to make the lives of migrant workers more tolerable. The unit ends by paying homage to the Native American Chief Standing Bear; Dorothy Vaughan, Katherine Johnson, and Mary Jackson, three African American women who made significant contributions to NASA; and Juan Felipe Herrera who became a famous writer despite his youth as a migrant worker. All of these leaders were ordinary folks who worked to make America “a more perfect union.”

CKHG Grade Levels: CKHG units are correlated to topics at the grade levels specified in the Core Knowledge Sequence, which allows students in schools following the Sequence to build knowledge grade by grade. In other settings, individual CKHG units may be used as supplemental resources. In general, the content and presentation in the CKHG units for Grades K-2 are appropriate for students in the lower elementary grades. The Student Book (available in English and Spanish) is intended to be read aloud by the teacher as the students look at images on each page.