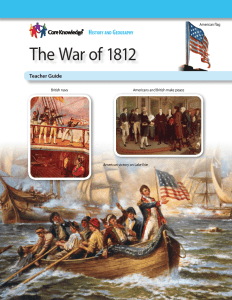 Focus: What happened when the British navy discovered that it was short of sailors in its war with France? Britain’s navy proceeded to board American trade ships to capture runaways, kidnapping some American sailors into the bargain. In this Grade 2 Core Knowledge History and Geography unit, students discover that this impressment of sailors made the Americans very angry. They learn that the British also decided to help Native Americans defend their land from settlement by the Americans, which led to the Battle of Tippecanoe in Indiana and eventually to a war between America and Great Britain in 1812.

Students hear that James Madison was president during this time, that his government hoped to force the British out of Canada, and that America fought Britain on both land and at sea. They discover that when the British came to burn the capital city of Washington, D.C., First Lady Dolley Madison had to escape from the White House, and she asked enslaved African American Paul Jennings to help save a portrait of George Washington that had been displayed there. They also hear that Francis Scott Key witnessed a key battle of the war, which inspired him to write “The Star-Spangled Banner,” the poem that became our national anthem. Finally students learn that the war ended in 1814 without changing very much other than showing that America could hold its own in battle.

CKHG Grade Levels: CKHG units are correlated to topics at the grade levels specified in the Core Knowledge Sequence, which allows students in schools following the Sequence to build knowledge grade by grade. In other settings, individual CKHG units may be used as supplemental resources. In general, the content and presentation in the CKHG units for Grades K-2 are appropriate for students in the lower elementary grades. The War of 1812 Student Book is intended to be read aloud by the teacher as the students look at images on each page.