Focus: This Grade 2 Core Knowledge History and Geography unit introduces students to the early Asian civilization of ancient India. Students will explore the geography of India, the Ganges and Indus Rivers, and the development of the first civilization in the Indus valley, where modern-day western India, Pakistan, and northeastern Afghanistan are located. The importance of settling near a river in order to farm is also reinforced. 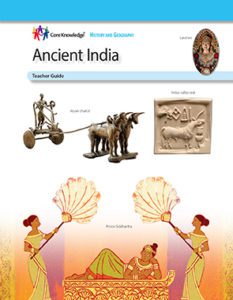 In the unit’s six chapters, students will study the culture and beliefs associated with ancient India. They will learn about the Aryan invaders, who came to the Indus valley from other parts of Asia, and whose beliefs became interwoven with those of the Indus people, resulting in the development of a new religion called Hinduism. Students will investigate three important Hindu deities, Brahma, Vishnu, and Shiva; the most important Hindu holy books, the Vedas; the castes, or different social levels, that Hindus have divided themselves into; and Diwali, the Hindu festival of lights.

Students will also explore Buddhism, which began in this region as well. They will learn about the Buddha, what he taught, and how Buddhism spread to other lands. They will study one of the Buddha’s Jataka tales and how such stories helped him spread his teachings, and they will also examine the life of King Asoka, the ancient king who put Buddha’s teachings into practice.

CKHG Grade Levels: CKHG units are correlated to topics at the grade levels specified in the Core Knowledge Sequence, which allows students in schools following the Sequence to build knowledge grade by grade. In other settings, individual CKHG units may be used as supplemental resources. In general, the content and presentation in the CKHG units for Grades K-2 are appropriate for students in the lower elementary grades. The Ancient India Student Book is intended to be read aloud by the teacher as the students look at images on each page.