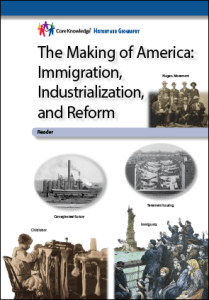 Focus: The resources for this unit (Industrialization and Urbanization in America) are part of the individual resources titled The Making of America: Immigration, Industrialization, and Reform. In this unit (Unit 8 for schools using the CKHG™ series in Sequence grade-level order), students explore the significant demographic and economic shifts that took place in the United States in the late 1800s and early 1900s, as the rise of big business ushered in an era of industrialization and urbanization across the country.

During this period, the country became an industrial giant, with vast numbers of Americans moving to the cities for factory jobs, capitalist entrepreneurs becoming exceedingly rich tycoons of big business, and inventors changing the way ordinary people lived for the better. Students also learn, however, that the benefits of industrialization and invention were not shared by all. Unskilled workers in particular struggled to find work, and when they did, often worked long hours in difficult and sometimes dangerous conditions. Eventually workers formed unions to fight for better pay and working conditions, and Americans tried to rein in the power of big business and stop corruption in cities, but these efforts initially only met with limited success.