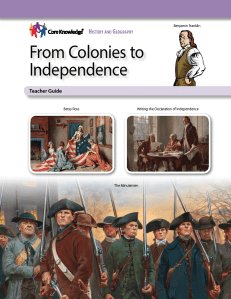 Focus: The Grade 1 Core Knowledge History and Geography (CKHG) unit From Colonies to Independence follows the evolution of the thirteen North American colonies, from their dependence on Great Britain to their victory in becoming an independent nation.

In 1776, Americans became the first people since the ancient Greeks to create a democratic government.. The Read Alouds in this unit allow students to journey with the colonists as they throw tea in Boston Harbor, sign the Declaration of Independence, and clash with the redcoats in the American Revolution. They meet Paul Revere, Benjamin Franklin, George Washington, and other patriots along the way.

In the nine chapters of From Colonies to Independence, students learn about the early years of our fledgling nation. They observe our battles with Britain, but more importantly, they witness the birth of a new political identity, achieved through the combined efforts of Thomas Jefferson, John Adams, and others. Students also learn about the establishment of Washington D.C. as our capital city, and about such key American symbols as the Stars and Stripes and the Liberty Bell.

CKHG Grade Levels: CKHG units are correlated to topics at the grade levels specified in the Core Knowledge Sequence, which allows students in schools following the Sequence to build knowledge grade by grade. In other settings, individual CKHG units may be used as supplemental resources. In general, the content and presentation in the CKHG units for Grades K-2 are appropriate for students in the lower elementary grades. The Student Book (available in English and Spanish) is intended to be read aloud by the teacher as the students look at images on each page.