Focus: This unit (Unit 7 for schools using the CKHG series in Sequence grade-level order) explores how three regions of English colonies in North America—Southern, Middle, and New England—developed differently as a result of each region’s geography and climate, as well as the different religions and beliefs of the colonists settling each area. Students learn about differences in climate and agriculture, as well as the growth of important cities including Philadelphia, Boston, New York, and Charleston. 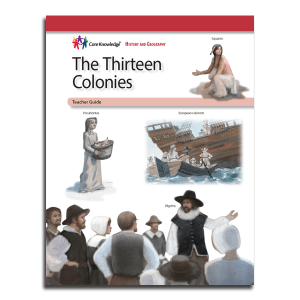 Early lessons focus on Jamestown, labor by indentured servants, and a growing reliance on enslaved workers. Students learn how religious motives influenced the founding of the New England colonies by the Pilgrims and Puritans, and explore what life was like for children in a Puritan colony. Students explore how the Middle Colonies were founded for financial and religious motives, with a focus on the Dutch in New York and the Quakers in Pennsylvania. Some chapters incorporate primary source documents and cross-curricular art and literature connections, including historically-informed imaginative narratives. Some content is tied to the “Pathway to Citizenship,” an array of civics-focused knowledge, questions, and activities.

Lesson Time: 30 minutes each daily. Lessons may be combined into longer sessions.