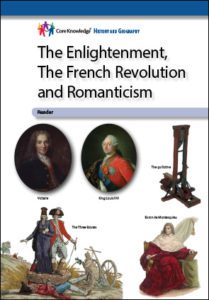 The unit first explores how Enlightenment ideas of freedom, equality, and natural rights, as well as the recent American Revolution, helped ignite the French Revolution in 1789, bringing down the ancien régime—the “old order,” with its indulgent absolute monarchy and rigid social classes. Students learn how radical political changes gave way to violence, including the execution of King Louis XVI and Marie Antoinette, followed by the Reign of Terror under Robespierre, during which many died under the guillotine’s blade. The French Revolution ended when the military genius Napoleon Bonaparte rose to become dictator and then emperor of France. Great art, music, and literature flourished during the time of French Revolution and the decades afterward. Initially, Neoclassicism, or a return to the forms and influences of Greek and classical art, took hold. Partly in reaction against Neoclassicism, and partly inspired by new ideas of nature and the individual articulated by Rousseau and others, the Romantic movement in art, literature, and music flourished. Students are introduced to representative Romantics, including the poets Byron and Wordsworth; the composers Beethoven, Schubert, Chopin, and Schumann; and, the painter John Constable.