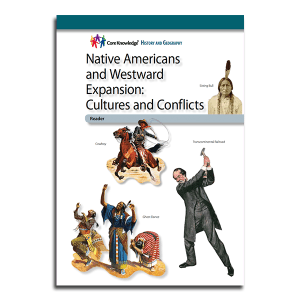 Focus: The resources for this unit (Westward Expansion After the Civil War) are part of the individual resources titled Native Americans and Westward Expansion: Cultures and Conflicts. This unit (Unit 12 for schools using the CKHG series in Sequence grade-level order) continues the story begun in Unit 10 (Westward Expansion Before the Civil War), and focuses on the causes and effects of the westward movement of Americans in the later 1800s, which often led to conflict with Native Americans displaced from lands they had long inhabited. Students learn how the prospect of gold or silver lured many adventurers westward, while millions of settlers were drawn by the Homestead Act, which Congress passed to encourage western settlement. Students consider how transcontinental railroads accelerated the settlement of the West by providing transportation for people and goods and opening new agricultural markets. Students explore the myths and realities of cowboy life and the “Wild West.” Students learn how the United States purchased Alaska from Russia, which provided the nation with a vast territory teeming with wildlife and rich in natural resources. Students also consider the late-nineteenth century idea of the “closing of the American frontier.” Some of the content of this unit is tied to the “Pathway to Citizenship,” an array of civics-focused knowledge, questions, and activities.