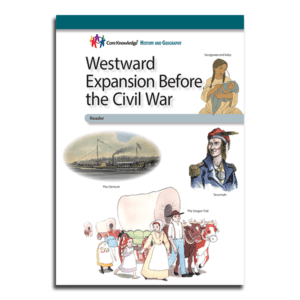 Focus: This unit (Unit 10 for schools using the CKHG series in Sequence grade-level order) explores how and why Americans moved west from the early to mid-nineteenth century. Throughout the unit, students study many geographical features of the U.S. Opening lessons introduce early explorers, including Daniel Boone, Zebulon Pike, and Lewis and Clark, who were aided by Sacagawea. Students learn how new developments in transportation (such as canals, steamboats, and railroads) spurred westward expansion. Students are introduced to Tecumseh as a leader of Native American resistance to settlers and government officials who broke treaties and pushed Native Americans out of their homelands. Students learn how the concept of Manifest Destiny was used to justify acquisitions of territory by the U.S. from the 1850s onward. Students also learn about the Indian Removal Act and the Seminole resistance led by Osceola. Students explore how the annexation of Texas gave the U.S. additional territory, fueled the controversy over slavery, and provided a pretext for war with Mexico. Students also explore westward movement along the Oregon Trail, the experiences of the Brigham Young and the Mormons, and the gold rush that drew many people to California. Some content is tied to the “Pathway to Citizenship,” an array of civics-focused knowledge, questions, and activities.

CHKG Grade Levels: CKHG units are correlated to topics at the grade levels specified in the Core Knowledge Sequence, which allows students in schools following the Sequence to build knowledge grade by grade. In other settings, individual CKHG units may be used as supplemental resources. In general, the content and presentation in the CKHG units for Grades 3-5 are appropriate for young readers from the upper elementary grades through middle school.