Focus: This unit (Unit 8 for schools using the CKHG series in Sequence grade-level order) explores the creation and central ideas of the United States Constitution. Students learn how, after the Revolution, the Founding Fathers, confronted by the shortcomings of the Articles of Confederation, worked to form a new government. 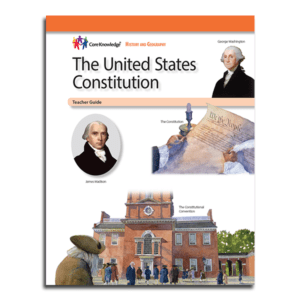 Led by the thinking of James Madison and Alexander Hamilton, the delegates at the Constitutional Convention grappled with critical issues such as defining the power of the central government, how that government should be structured, how large and small states should be represented, balancing power between the central government and the states, and dealing with the divisive issue of slavery. Students learn why the Bill of Rights was added to the Constitution, and explore reasons why the Constitution has survived as the guiding document of government in the United States. Some lessons present primary source documents and additional activities examining key principles of the Constitution, including the Bill of Rights. Much of the content of this unit is tied to the “Pathway to Citizenship,” an array of civics-focused knowledge, questions, and activities.