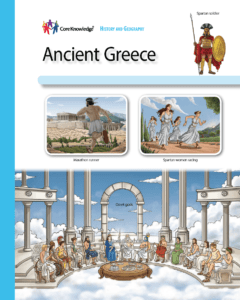 Focus: No ancient civilization has had more influence on the Western world than that of ancient Greece. In the Grade 2 Core Knowledge History and Geography unit Ancient Greece, students explore the ideas, patterns of government, and art forms that have formed the basis of much of our own culture.

The unit moves from the early days of city-states, particularly of Athens and Sparta, to the empire of Alexander the Great. Along the way, students meet the gods and goddesses on Mount Olympus, as well as the great philosophers of ancient Greece, Socrates, Aristotle, and Plato; and they witness the origins of both the Olympic Games and of democracy.

Through the eight chapters of Ancient Greece, students discover many of the political and philosophical building blocks that inform our own society today.

CKHG Grade Levels: CKHG units are correlated to topics at the grade levels specified in the Core Knowledge Sequence, which allows students in schools following the Sequence to build knowledge grade by grade. In other settings, individual CKHG units may be used as supplemental resources. In general, the content and presentation in the CKHG units for Grades K-2 are appropriate for students in the lower elementary grades. The Student Book is intended to be read aloud by the teacher as the students look at images on each page.