How did George Washington’s leadership at Valley Forge, and his later insistence that he serve only two terms as president, reflect his virtuous character? What did Ida B. Wells’s fight against Jim Crow laws and lynching say about an individual’s moral duty in America? Why did Padre Miguel Hidalgo y Castillo decide to break the law to help the indigenous people in his Mexican village, and what did his role as a revolutionary demonstrate about his values? Such stories of historical leaders and reformers are central to the Core Knowledge History and Geography™ (CKHG™) program, and they can serve as a rich resource for the study of character.

CKHG’s Grade K−6 world and American history curriculum—including twenty-four brand-new K−2 units—provides elementary teachers with innumerable examples of figures in history who displayed virtuous character, as well as some history makers whose actions proved harmful. These stories can be used to think about and discuss issues of character faced by people throughout history.

The Core Knowledge Foundation is pleased to call to your attention two resources that teachers may find useful in integrating Core Knowledge content with classroom discussions about important values. 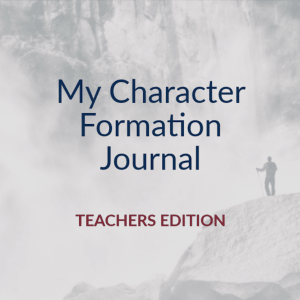 The Civic Character Formation Project (CCFP) draws on CKHG content to help students develop their own sense of character. The Character Formation Project is a nonprofit that strives to prepare students to lead fulfilling and virtuous lives. Like Core Knowledge, CCFP uses outside subject matter experts to review their material. Designed to align with CKHG, CCFP’s vividly written accounts effectively place the student at moments of moral decision making, allowing for reflection, discussion and the examination of virtue. CCFP programming focuses on seven virtues that have been exhibited throughout time by countless individuals who have worked to advance human freedom. The seven virtues are justice, respect, responsibility, integrity, self-sacrifice, diligence, and courage. 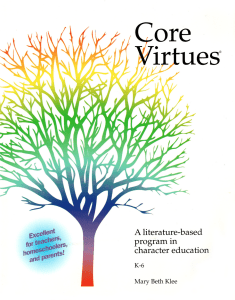 Twenty-three years ago, Mary Beth Klee designed Core Virtues, a nonsectarian approach to character education for students in Grades K−6. Klee founded Crossroads Academy, an independent day school in New Hampshire, with the twin goals of academic and moral excellence. To accomplish these goals, she oversaw the implementation of the Core Knowledge Sequence at her school, and then created the Core Virtues program. Teachers who follow the program read quality children’s literature “to provide inspirational or insightful examples of virtue in action.” Each month teachers highlight a key intellectual, moral, or civic virtue, such as respect, responsibility, diligence, honesty, generosity, or perseverance. They read quality children’s literature at a “Morning Gathering” to provide inspirational or insightful examples of virtue in action. The reading of these well-written and often beautifully illustrated stories helps children to fall in love with the good, and to cultivate a vocabulary of virtue.

Of particular interest to Core Knowledge Schools is a feature entitled Core Knowledge Connections that highlights the elements in the Core Knowledge Sequence that align to the Core Virtues program. Also don’t miss the September blog post by Mary Beth Klee, “Eyes on the Prize:  Knowledge and Virtue.”