Congratulations to Dr. Gregory Meece, who is soon to retire after eighteen continuous years as Director of  Newark Charter School, now the school with the largest enrollment of all pre-collegiate schools—public, charter, or private—in the state of Delaware.

Back in 2000, when the school was still in the planning stages, few might have anticipated such growth. While Newark Charter had the backing of committed and enthusiastic parents, it lacked a few things—as Greg recalls, “We didn’t have any money, didn’t have any curriculum, didn’t have staff, didn’t have a building.”

Greg, who was hired as School Director from the start, scrambled to find a facility—“We had no track record, and we couldn’t get a loan because we had no collateral.” But at least he found a curriculum. A parent on the founding committee asked Greg if he had heard of Core Knowledge. Indeed he had.

In a graduate course at the University of Delaware, Greg had recently read E. D. Hirsch, Jr.’s The Schools We Need and Why We Don’t Have Them. Looking back, says Greg, “I suspect the book was assigned as a contrast to the other curriculum models” represented in most of the readings in the course. After reading Hirsch’s book, Greg’s response was, “This makes perfect sense.”

What made perfect sense to Greg also made sense to prospective parents of the new charter school. “From the very beginning,” he says, “when I was going around neighborhood to neighborhood talking about Newark Charter School, long before we had any teachers, before we had a facility, I talked about Core Knowledge—and I could see the parents’ heads going up and down as I explained the concepts behind it.”

Greg told parents how Core Knowledge “sets the bar high, how it works for any kind of learner, how the topics are integrated within a grade level, and how they build carefully year to year to avoid gaps and unnecessary repeats, giving kids the ‘intellectual Velcro’ that lets them gain new knowledge more easily because they have a good foundation, a good background.” 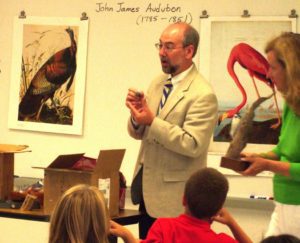 Parents, says Greg, “basically understood Core Knowledge from the beginning, and we’ve stuck with it because we’ve had so much success with it”—success borne out by the school’s state test scores, consistently among the highest across Delaware’s schools, as well as two National Blue Ribbon Awards for academic excellence.

While Greg is proud of the school’s high scores, he says, “I don’t wait to see what our state test scores look like to see if we’re successful. I listen to what parents tell me their kids are talking about at the dinner table. If they’re talking about history and literature and art and music, I know we’re already successful. Because once kids are tuned in and they enjoy learning, they’re going want to do well and do more of it. The instruction in the classroom, the classroom environment, and the content of the curriculum all have to stimulate the kids to get them interested and get them wanting to learn more.”

Under Greg’s committed leadership, Newark Charter School has grown steadily. When the school opened in the fall of 2001 it served 450 students in grades 5-7, housed in rented trailers. Now it serves 2,400 students in grades K-12, and the campus consists of three buildings owned by the school, with a fourth building in the planning stages. Moreover, says Greg, there are about 3,000 students on a waiting list to attend Newark Charter. Admission to the school, notes Greg, is by lottery. “We have all kinds of students here,” says Greg, representing a cross-section of income and ability levels.

One thing, says Greg, that has consistently encouraged him during his time at Newark Charter is seeing “our students rise to the occasion and enjoy learning about topics that are daunting to adults.” He recalls a special education class in the school’s first year, with “about six or seven students who met in half a trailer next to my office. They were studying Shakespeare’s tragedy Julius Caesar. The teacher called me over and said, ‘My kids want you to come see what they can do.’ So I stepped over, and here were these kids, dressed in togas and with laurel wreaths on their heads, and they acted out scenes from Julius Caesar. They could tell you the story, tell you who the characters were, tell you about Shakespeare. These kids were only 11 years old, and they had learning disabilities, and they were enthusiastic about Julius Caesar—and I’m thinking, holy cow, this is really amazing!”

As amazing, perhaps, as eighteen unbroken years of steady leadership and dedicated service—for which, Greg, the Core Knowledge Foundation offers sincere thanks and all best wishes for the years ahead!

8 comments on “Steady Leadership and Success at Newark Charter”