A History of the United States consists of two student books and one teacher guide. 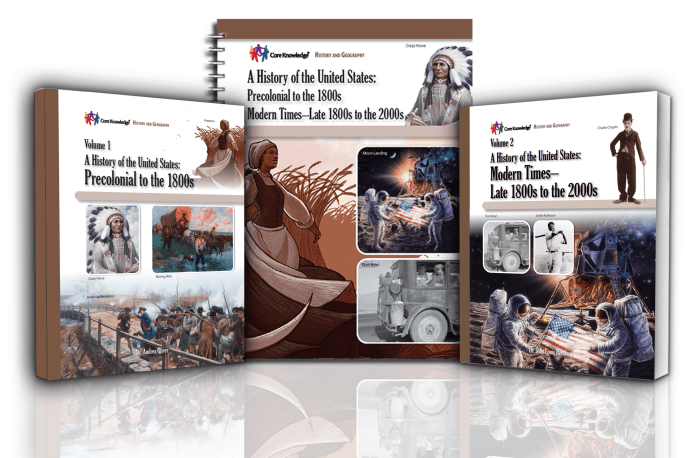 The Teacher Guide provides detailed lesson plans for each Student Volume chapter, as well as a Daily Check for Understanding, Activity Page Masters, Assessments, Additional Activities, and Civics and Arts connections to reinforce the lesson content. Various Pacing Guide options are provided as part of the online resources. In addition, the Teacher Guide contains the following new features:

A Free Download of the Teacher Guide is available here

Student Reader Volume 1, A History of the United States: Precolonial to the 1800, offers engaging text and a rich selection of images. Some of the topics covered are:
The Americas were inhabited by diverse indigenous peoples; the thirteen English colonies were established; Americans fought the British for liberty and justice; with the creation of the Constitution and Bill of Rights, the U.S. became the first country to create a government of the people; compromise over the issue of slavery eventually led to Civil War; Westward expansion of the United States provided economic opportunity for many and contributed to the growth of the nation, but at the price of Native American sovereignty; the U.S. became a world power in the late 1800s and early 1900s, a period marked by immigration, industrialization, and urbanization.

A Free Download of Student Reader Volume 1 is available here

Student Reader Volume 2, A History of the United States: Modern Times – Late 1800s to the 2000s addresses the following topics: The U.S. experienced economic, technological, scientific, and social changes in the 1900s; the U.S. supported the Allies in World War 1; the Roaring Twenties was followed by the stock market crash and the Great Depression; the U.S. entered World War 2 after Japan’s attack on Pearl Harbor; the U.S. developed the atomic bomb; the U.S. and the Soviet Union competed for global influence in the Cold War; the 1960s and 1970s were decades of social change; the 1980s and 1990s, saw economic growth and involvement in regional conflicts; the early 2000s brought economic, environmental, political, and international challenges, including 9/11 and war in Iraq.

A Free Download of Student Reader Volume 2 is available here

The Blessings of Liberty – Voices for Social Justice and Equal Rights in America, a collection of historical primary source readings focused on the United States from about 1840 to 1920, invites middle school students to engage directly with the words of people who worked for freedom, justice, and reform in America. The topics covered include those who spoke who out for reform … 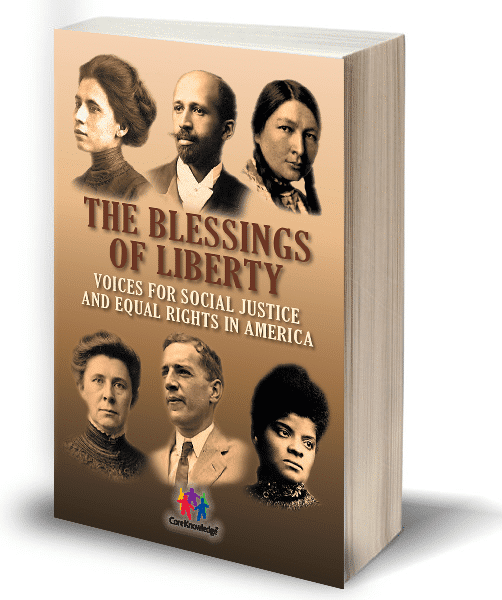 A Free Download of The Blessings of Liberty is available here

A Teacher Guide, Student Activity Book, and Online Resources are also available for Free Download. These materials are appropriate for use as part of language arts and/or history instruction.

Print Copies of Student Book, The Blessings of Liberty, are also available for purchase here