In April 2017 Dr. Zissios received the Don Lacey Award for Excellence from the Virginia Association of Elementary School Principals (VAESP) for “her commitment to and demonstration of exemplary educational leadership.”

I am currently in my twenty-fourth year as an elementary school administrator in Virginia public schools. In two different districts, one suburban and one urban, I have worked at three different elementary schools serving three different student populations—one high poverty, one mostly English Language Learners, and one of mixed socio-economic levels. Throughout my long and varied experience, one constant has been my choice of curriculum—Core Knowledge. In each school and in each district, I alone among my colleagues embraced and supported the Core Knowledge curriculum.

Time and again, I’ve been asked—often by very skeptical voices—why I am so passionate about Core Knowledge. I might point to results. In each school in which I have served, the students outperformed their peers on district and state assessments. My current school, Lyles-Crouch Traditional Academy, a K-5 school in the city of Alexandria, and a Core Knowledge School of Distinction, is in the top five percent of schools in the Commonwealth of Virginia, meeting all benchmarks for all subgroups on the state Standards of Learning tests (Reading, 95%; Math, 92%; History, 97%; Science, 92%).

But to explain why I remain passionate about Core Knowledge, I really have to bring you into a classroom. When you observe a Core Knowledge lesson in progress, you will be amazed at the depth and breadth of knowledge students are exposed to.

I was recently observing a second grade class in which the teacher was conducting the CKLA (Core Knowledge Language Arts) lesson on the Pony Express. The students had previously been studying the Core Knowledge lesson on Westward Expansion. The students—keep in mind that these are second graders—had learned about the concept of Manifest Destiny, and about factors that enticed people to move west.

In their class open forum, the students recognized and discussed the growing need to send messages across greater distances. This specific CKLA lesson on the Pony Express taught students about the evolution of communication systems in the 1800s, including the implementation of this short-lived mail delivery system and the invention of the telegraph. During a discussion of the Pony Express, students made connections to an earlier lesson on the War of 1812. They interjected that the peace treaty was signed on Christmas Eve in 1814, but the news of the signing did not reach the troops in time to prevent the Battle of New Orleans. The students saw the problems created by slow communication. And they understood how, later, the need for faster communication eventually contributed to the demise of the Pony Express and the ultimate success of the telegraph.

The introduction of this faster means of communication engaged the students in asking and exploring many questions: Who invented the telegraph? How did it work? What is the difference between a telegraph and a telephone? What is Morse Code? Again, these were seven-year-old students from a socio-economically and ethnically diverse community!

My visit to this classroom reminded me of one thing that Core Knowledge is NOT. It is NOT rote memorization of scripted lessons or the completion of mindless worksheets. It IS, rather, the thought-provoking higher-order application of prior knowledge to new circumstances. It is a sequential, spiral curriculum that builds on previous learning as it expands and deepens students’ knowledge base.

Every time I visit a classroom, my passion for Core Knowledge is renewed. I have no plans to move to another school or district, but were I to do so, I would bring Core Knowledge with me. I know of no more effective way to prepare our students for our complex and changing 21st century society.

Update: In  August 2017, Lyles-Crouch Traditional Academy was among the schools to receive the Virginia Board of Education’s Excellence Award, conferred upon schools that “met all state and federal accountability benchmarks and made significant progress toward goals for increased student achievement and expanded educational opportunities.” 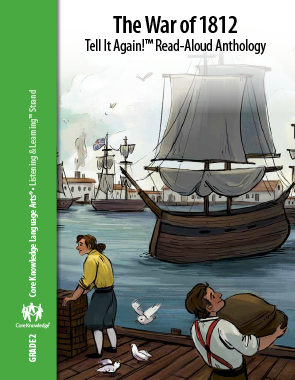 8 comments on “Why I’m (Still) Passionate About Core Knowledge”