Ilene Shafran is a second grade teacher with twenty-four years of experience. Her diverse public school has a large English as a second language population and has earned a Blue Ribbon  from the US Department of Education. Shafran is involved in curriculum design, is a facilitator for a professional learning committee, and is a member of the United Federation of Teachers’ consultation committee.

So I did it. My second grade students had a full year of Core Knowledge Language Arts (CKLA) for the first time. I piloted CKLA the previous year and decided to teach the full program because students were engaged, there were so many genuine writing opportunities, and I simply loved it.

It made sense to me to teach content, vocabulary and knowledge in the morning and then teach the more skills-based lessons and decodable reader lessons in the afternoon. The enjoyment and learning process was mutually beneficial. Each read-aloud story captured students’ interest like no other literacy program I have used. Each lesson presented questions and discussion topics that were intriguing, relevant, and thought provoking. I was especially impressed with my “faithful five,” a group of five students that always raised their hands to answer content-based questions. They were a mix of children with high and average abilities—the one thing they had in common was having been exposed to pilots of CKLA in first grade. I am looking forward to next year’s second graders, who all had a full year of CKLA in first grade. They should be ready to jump right in.

In addition to the great conversations and accountable talk we had this year, my students wrote high-quality pieces about some very sophisticated topics. As CKLA is designed for students to acquire a broad knowledge base, it also lends itself to going through the writing process and creating rigorous writing lessons on a variety of topics. I am amazed and very pleased that my students were able to write in such detail using rich vocabulary, as well as incorporating second-grade Common Core standards for writing.

Together, all of the second-grade teachers decided that our first writing piece would be on the Chinese New Year after studying ancient China. We chose this topic because most students were familiar with it, so the CKLA read aloud added to their prior knowledge and enabled them to write in some detail. We used this writing piece as a baseline for informational writing. By looking at these writing samples, we were able to assess students’ strengths and needs, as well as set beginning of the year writing goals. Then we learned about ancient Indian and Greek civilizations. Students picked an ancient person to write a narrative about—many chose Alexander the Great, whom they found fascinating.

Some of my favorite writing pieces were those we did during the Greek mythology domain. We created Greek myth journals where students kept track of the different stories by writing responses to each myth. Many students also wrote their own Greek myths trying to explain things about the natural world. This very sophisticated type of writing was modeled and done in groups, but it also allowed our high achievers a chance to write an original myth on their own.

Midyear, we studied cycles of nature and students learned how to write comparisons using a variety of organizers. Then, students used their organizers to plan and write a comparison paragraph.

After studying insect groups, students had a lot of fun writing in the narrative genre when they pretended to be an insect and tell all about themselves from the insect’s viewpoint.

Then it was onto major events in American history—the War of 1812 and all of the fascinating people that helped create our great nation. My students were captivated by James and Dolley Madison. Over the winter break, we asked students to write a speech about someone from 1812 and create a “wearable” biography. Students created a poster board of fun facts and pictures of the person they chose, then cut out holes for their faces and arms. Students made terrific speeches and marched around in a parade showing off their knowledge to parents and peers.

After this domain, we moved on to studying Westward expansion. It was fun for my students to learn so much about pioneer days and traveling across America in covered wagons. We used the domain worksheets to make story quilt squares for each read aloud in which students wrote key details and responses. Since the writing activity was ongoing throughout the unit, it gave students an opportunity to create a wonderful project at the end of the unit. Students put all their story squares together and created a pioneer quilt. It was visually beautiful and loaded with students’ writing.

Our lessons and read alouds during the Human Body domain were most intense. I was extremely impressed by my students’ maturity as they examined all the diagrams and posters of the different systems of the human body. No one screamed! There were chuckles and gasps, but for the most part my students were able to control themselves. More importantly, there were a lot of technical terms that they learned through the diagrams and labeled pictures. Alone the way, we gained an appreciation for pre-med students. My students looked forward to the nutrition part of the domain and had fun writing about their healthy days.

After studying Immigration, students put themselves in the shoes of an immigrant from the early 1900s and wrote about choosing a place to live in America. This piece allowed students to write a narrative based on real facts they learned. We explored the different cities across America and the different reasons why immigrants picked one place over another.

This was a full, rewarding year of questioning, thinking, learning, and writing. We had wonderful writing sessions in which we looked at the craft and elements of good writing—writing that my students felt proud of because they gained the knowledge and had access to all the key information. They became experts in the areas they wrote about, giving them confidence to tell others what they learned. A common introduction for many of my students became “This is what I learned about….” When I look back on everything my students learned this past year, I am very satisfied with and appreciative of this curriculum. I can’t imagine teaching any other way.

My students’ writing samples speak for themselves. 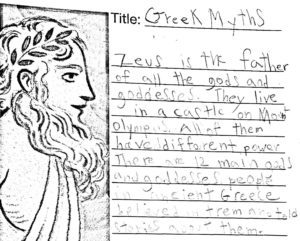 These two samples are from a boy who struggled at the beginning of the year; to complete his Chinese New Year piece, he required one-on-one guidance to express his ideas. He improved quickly, writing about Zeus independently and “on demand” in response to a prompt after just four (out of twelve) CKLA domains.

This insect narrative was written by a girl who is an English language learner. She has good comprehension, but finds adding numerous details challenging. She wrote this piece in February without any teacher or peer assistance.